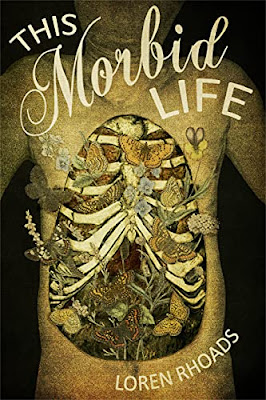 What others have called an obsession with death is really a desperate romance with life. Guided by curiosity, compassion, and a truly strange sense of humor, this particular morbid life is detailed through a death-positive collection of 45 confessional essays. Along the way, author Loren Rhoads takes prom pictures in a cemetery, spends a couple of days in a cadaver lab, eats bugs, survives the AIDS epidemic, chases ghosts, and publishes a little magazine called Morbid Curiosity.

Originally written for zines from Cyber-Psychos AOD to Zine World and online magazines from Gothic.Net to Scoutie Girl, these emotionally charged essays showcase the morbid curiosity and dark humor that transformed Rhoads into a leading voice of the curious and creepy.
Amazon
Excerpt from "Anatomy Lesson":
I had a lot of preconceptions when it came to handling corpses. I’d imagined myself standing before a wall of stainless-steel freezer drawers like at the Mortuary College in San Francisco. In my imagination, the cadavers were draped with crisp white sheets. The bodies would be antiseptic. I expected them to be frozen. I thought everything would be as clean and neat as a television morgue.

The cadavers would be male, of course. I thought I could depersonalize a dead man more easily; I might empathize too much with a woman as the scalpel in my hand sliced her flesh.

Tom quickly rearranged my expectations. “Three of the four cadavers here are female,” he said. “I usually start people out with the women, since they’re the most taken apart. That’s a little easier for people to deal with.”

The bodies weren’t kept in refrigeration units. Instead, they were already waiting in the front of the classroom, lying in long stainless-steel bins with wheeled legs and a hinged two-piece top. When Tom folded the top open, clear fluid spilled onto the floor.

“And some preservative,” he answered. When the worst of the runoff had stopped, he let the top hang down and opened the other side.

I was amazed we’d been in the room with the bodies all along. One of my memories still clear from ninth grade dissection was the horrible, headache-inducing smell of formaldehyde. I was glad preservative technology had improved.

A length of muslin floated atop the brownish red liquid. Blood, I thought immediately, and recoiled. Too thin for blood, it looked more like beef broth. Pools of oil slicked the surface.

“See that handle there? You can help me by turning it.” Tom moved to the far end of the tank.

There should have been scary music playing as we cranked the cadavers out of the fluid. As the bodies slowly rose, the muslin took on their outlines. Through the shroud, I saw bared teeth and the flensed musculature of jaw. Two corpses lay head to feet. The skin had clearly been flayed from their muscles.

If Tom had made them twitch, I would have leapt out of my own skin.

He pulled on some heavy turquoise rubber gloves and folded the muslin so it shrouded both faces and one entire body. The other lay revealed. Her skin had been stripped away. She had no breasts. The muscle fibers of her chest were very directional and clear, the raw color of a New York strip steak. Some of the muscles on her arms had been removed to show the bones and tendons beneath. Her fingertips still had nails and skin. The skin was the color of dried blood.

Excerpt from "The Ghost of Friends":

On Thanksgiving morning, I was making coffee when Jeff strolled out of his room. I debated what I should say. When my hands were busy filling the pot in the sink, I said, “I saw Blair’s ghost last night.”

“I haven’t seen him,” Jeff said, “but I’ve been pretty sure he was here.” I don’t know what I expected to hear, but that wasn’t it. Jeff is very down-to-earth, feet on the ground. If he could sense the ghost, then something must surely be there.

He told me, “One morning I was lying in bed in that half-awake state, thinking about the ghost. I felt a blast of wind blow straight up the length of my body into my face. When I opened my eyes, there was nothing to be seen—and nowhere for the wind to have come from.”

I shivered. Jeff slept in the bed where Blair suffered and died. It was all I could do to make myself sit on the bed when we watched a movie.

“Did he speak to you?” Jeff asked.

“I wonder what he wants.”

Of course, it could all be shrugged off as the power of suggestion on susceptible minds. I was very high, then sleepy; Jeff was half-awake. But it makes sense to me that if you don’t have a corporeal body to affect real space, you have to work in those times and spaces when people will be most likely to sense you. Or maybe he’s there all the time and we’re only able to perceive him when we’ve lowered our resistance.

The last time I saw Blair’s ghost, he was full color. He wore a red flannel shirt over black jeans, just as in life. His hands were linked behind his head as he lounged on the bed, ankles crossed. His black hair had grown out to the velvet stage. He looked healthier than he had in the entire last year of his life. His dark eyes sparkled as he grinned at me: Gotcha.

Immediately, I turned back to the stereo. It was Monday. Blair had died on a Monday. He’d died in the afternoon, in this room, on that same side of the bed.

All that flashed through my mind, followed by a rush of fear. I did not want to have my back turned to Blair’s ghost.

I whirled around so fast that I stumbled against the bookshelf and had to reach out to steady myself. The bed was empty again. Blair was gone.

I reached the incense down from the bookshelf and lit a stick of Blair’s favorite sandalwood. I waved the smoke over the bed and myself before leaving it to burn on the bedside table.

“Be at peace,” I wished him, but I had the sense that he was. 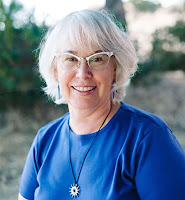 About the Author:
Website-FB-Twitter
Blog-Instagram
Newsletter
Amazon-Goodreads
Loren Rhoads is the author of 199 Cemeteries to See Before You Die, Wish You Were Here: Adventures in Cemetery Travel, a space opera trilogy, and a duet about a succubus and her angel. She is also the editor of Morbid Curiosity Cures the Blues: Tales of the Unsavory, Unwise, Unorthodox, and Unusual and Tales for the Camp Fire: An Anthology Benefiting Wildfire Relief. This Morbid Life, her 15th book, is the first in the No Rest for the Morbid Series. Book 2, Jet Lag & Other Blessings, will be out in 2022.