Welcome back to the alpha male diner! One of our most popular cooks, Felicity Heaton, is back. We do love her vampire meals, but today she has cooked up a new dish! Prince Loren a Dark Elf Prince from her new Eternal Mates Romance Series. Grab a napkin...no, grab two, and grab a bite! Method:
Begin by mixing honour, determination, heart and courage together with red-hot blood, stirring gently to incorporate. Mix in the dash of darkness and the psychic powers. Set aside.

Combine delicious body with wild black hair, sinful mouth, razor-sharp fangs, and striking purple eyes. Eyes may appear blue at first. If this is the case, he’s playing at being human. Add ears. If eyes are blue, expect them to appear normal and very mortal. If eyes are purple, they will be pointed. Warning: If they grow pointier and flare back against his head, give him space. He is probably gearing up to kill you.

When he is calm, sprinkle liberally with elvish markings. These may shimmer in beautiful colours at first and then disappear. This is normal. Expect markings only to appear when he’s touched by his mate, agitated, or extremely annoyed.

Take his personality mix and pour it down his throat. Wait for it to take. This may be evident by him suddenly becoming more restrained and looking less like he might kill you. Subject will also gain a more regal bearing.

Place black and silver bands containing his armour around his wrists. Step back and watch in awe as he mentally commands his scale-like armour to emerge from the bands, covering his entire body like a second-skin and turning his fingers into serrated claws.

4.5 Sheep book review of Kissed by a Dark Prince 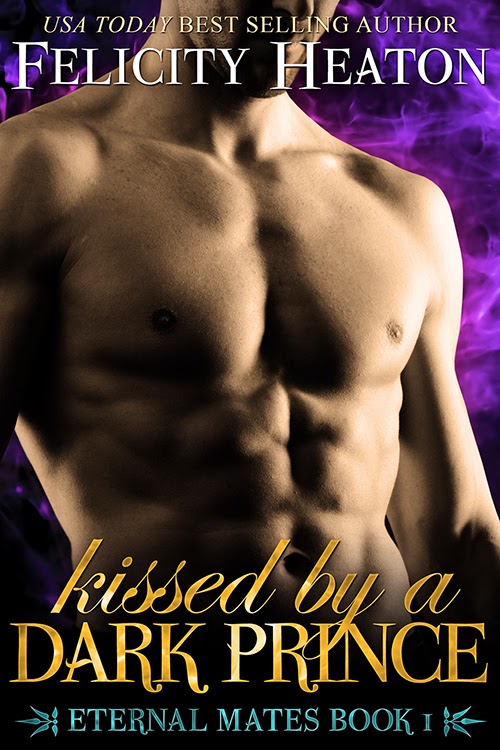 Kissed by a Dark Prince (Eternal Mates Romance Series Book 1)
Felicity Heaton
Olivia thinks it’s her lucky night when a dangerously handsome unconscious fae ends up on her inspection table. He’s her chance to redeem herself with her employer, the demon-hunting organisation, Archangel. But when the tall, dark and deadly immortal warrior awakes, she gets much more than she bargained for…

Attacked by his enemy in the elf kingdom, the last thing Prince Loren expects when he comes around is a beautiful angel watching over him and medical technology of the mortal realm. Hazy from his injuries, all he can focus on is the pulse ticking in her throat and the sweet allure of her blood.

One single bite reveals she is his eternal mate, triggering a bond between them that will leave him weakened until it is completed… or broken, and pulling Olivia into the crossfire of his ancient feud.

To protect his people and his mate from the machinations of a madman, Loren must risk everything by working with Olivia at Archangel to find a way to break the bond blossoming between them.

But will Loren be strong enough to place duty before desire and give up the one thing he has waited millennia for and craves above all others—his eternal mate? And will Olivia be able to resist the incredible heat that burns between them and the temptation of her dark prince’s kiss?

Kissed by a Dark Prince is available from Amazon Kindle, Kobo Books, Barnes and Noble Nook, Apple iBooks stores and other retailers. Also available in paperback. Find the links to your preferred retailer and a downloadable 6 chapter excerpt at: http://www.felicityheaton.co.uk/kbadp If you want to know more about Felicity, or want to get in touch, you can find her at the following places:

Be sure to follow this fantastic tour to learn more about the passionate heroes and sassy heroines in the Eternal Mates romance series! You can also find yourself in with a chance to WIN a $50 or $25 Amazon Gift Certificate if you follow the tour. More details, including how to enter and a full list of stops, are available at the Kissed by a Dark Prince
Virtual Book Tour page:
http://www.felicityheaton.co.uk/kissedbyadarkprince-book-tour.php