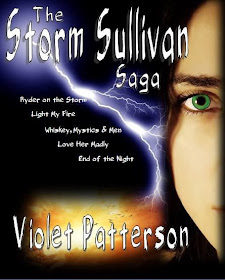 Faithful friends...with secrets of their own.

Intensified with an uncovered past.

How will it all END?
Storm Sullivan's life is a mystical mine field following the death of her Aunt Trin and it only gets worse. Thrown into the battle of the ages, Storm finds herself surrounded by Immortals, Seraphs, Fairies, Vampires, Witches and a Phoenix! Can she unravel the mysteries of her family's past in time to save them all?

For the first time ever, the Kindle Bestselling Emerald Seer Series is brought to you in one massive box set. Magic and mystery, adventure and romance converge in this series touted as "unique and imaginative." Mystical beings from Deities to Seraphs, a Phoenix, Immortals and more, the Emerald Seer Series is a fantastical ride with several converging story lines that will keep you guessing.
Amazon Links for The Storm Sullivan Saga: Emerald Seer Box Set

Storm Sullivan introduces herself:
Life was easier before. Sure I was little more than a glorified gypsy and maybe I spent more than my fair share of time hitching around cruise ships posing as a fortune teller but at least I was blissfully ignorant. I’m getting ahead of myself again. I tend to do that. I apologize. My head is a bit cloudy these days and I forget the little things like introductions especially since I rarely meet somebody who doesn't already know who I am. Not that I’m famous, I mean, I guess I am but not in the regular world. I’m not a movie star or anything. I’m Storm. Yes, that is my real name. Hilarious, I know. The irony is only apparent now that my life has imploded. My mother just liked The Doors and named me for her favorite song. Sad, but true. I prefer People Are Strange or Love Her Madly. Ah, Love Her Madly. Great lyrics. But then again, I am more of a Tom Petty and the Heartbreakers fan. Walls. That’s a great little song. Dammit. I am getting off track again. I just can’t seem to get a handle on my thoughts or anything else for that matter. Who knew emotions could be so problematic? Then again, I didn’t really know I’d been without them until **bam** out of left field there they were. Emotions. Like real tears and rage and worst of all, passion.

I got ahead of myself again, didn’t I? Where to begin? I meant for this to be a bit of an introduction to my life, a little inside scoop on why you should read my whole story. At least that’s what Violet asked me to do. She should have done this, not me. She’s always been better at organizing the chaos that is my life into a nice linear story. But, Violet insisted I do this one on my own so I am. It all really started with the vision. Seers are not supposed to be able to see their own deaths. It has something to do with personal gain and nobody needing to know too much about their own future. So, aside from the mind trip of seeing my death at the ripe old age of seventeen, I had to worry about some other supernaturals finding out which would have led to me being locked up and treated as a test subject for the rest of my natural life. Still wondering why I ran? In my rather naïve mind I thought for sure there would be a way out, a way to change even my destiny. But destiny, it is a funny thing. As it turned out, that little vision of mine didn’t matter so much in the end. It was a part of something so much larger. At seventeen I couldn’t see it. Everything happened as it should have, or rather one of only two ways it could have.

I did it again, didn’t I? My story is complicated and I am not a storyteller. I’m still not sure how Violet made sense of the madness but she did. I would guess Ryder helped. Soph and Lucian surely chimed in. And, probably the guys, I mean, Dan and Shane, my guardian angels (don’t tell them I called them angels, they prefer Seraphs) and my best friends. I haven’t read it myself but I hear it’s pretty accurate, at least that’s what Angeline says. I’ll take her word for it. I think it would be weird to read about myself. I mean, I lived it and all. 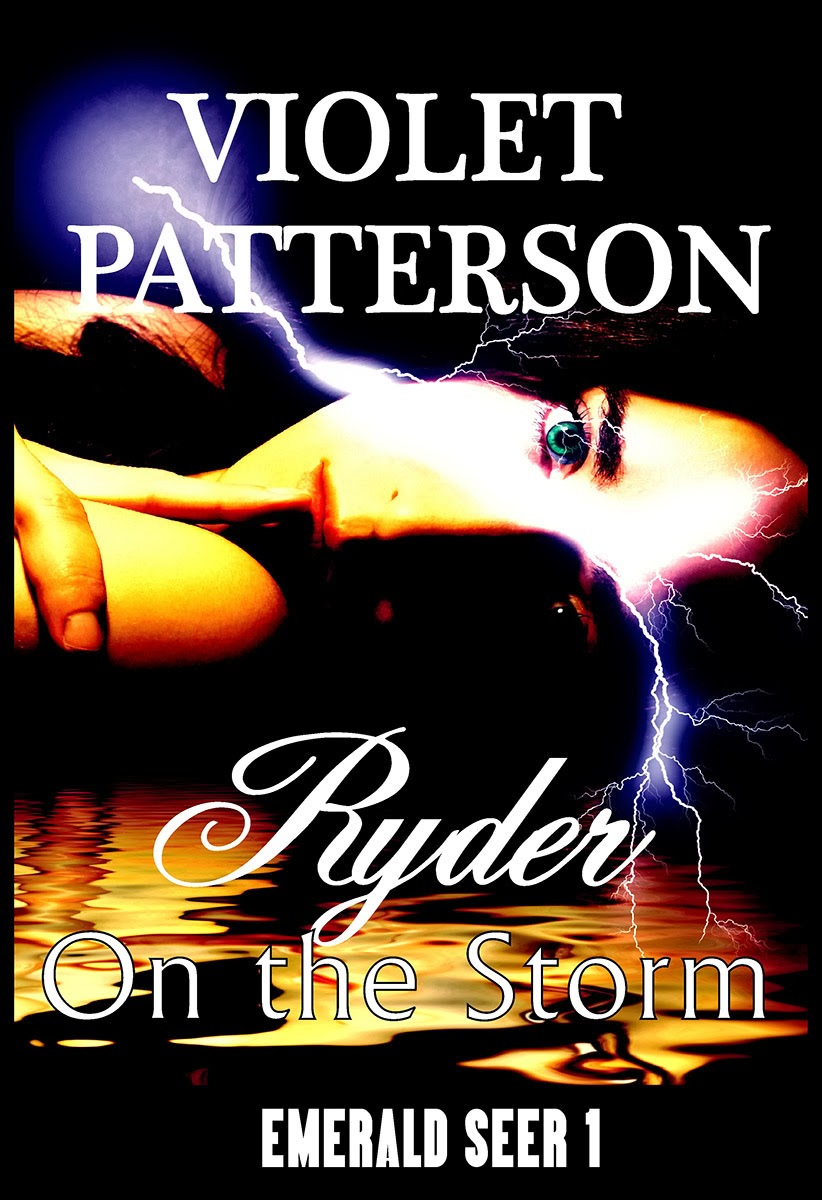 Ryder On the Storm (Book #1)
Storm Sullivan is a Seer from an ancient line forced to return home after the brutal murder of her aunt. But Storm finds she’s inherited more than just the family estate.

Ryder Cohen is an Immortal, a former enforcer commissioned to eradicate the Sullivan line and prevent the rise of the Emerald. But Ryder has come to question his mission and the reasons behind it.

Ryder On the Storm is the first in the Emerald Seer series. An urban fantasy with a supporting cast of Immortals, Seraphs, and Deities this is just the beginning of Storm's journey.

The Emerald Seer saga continues with rebirth in LIGHT MY FIRE and intensifies with an uncovered past in LOVE HER MADLY. Still craving more Emerald Seer action? Check out WHISKEY, MYSTICS, and MEN to discover Angeline's secrets. 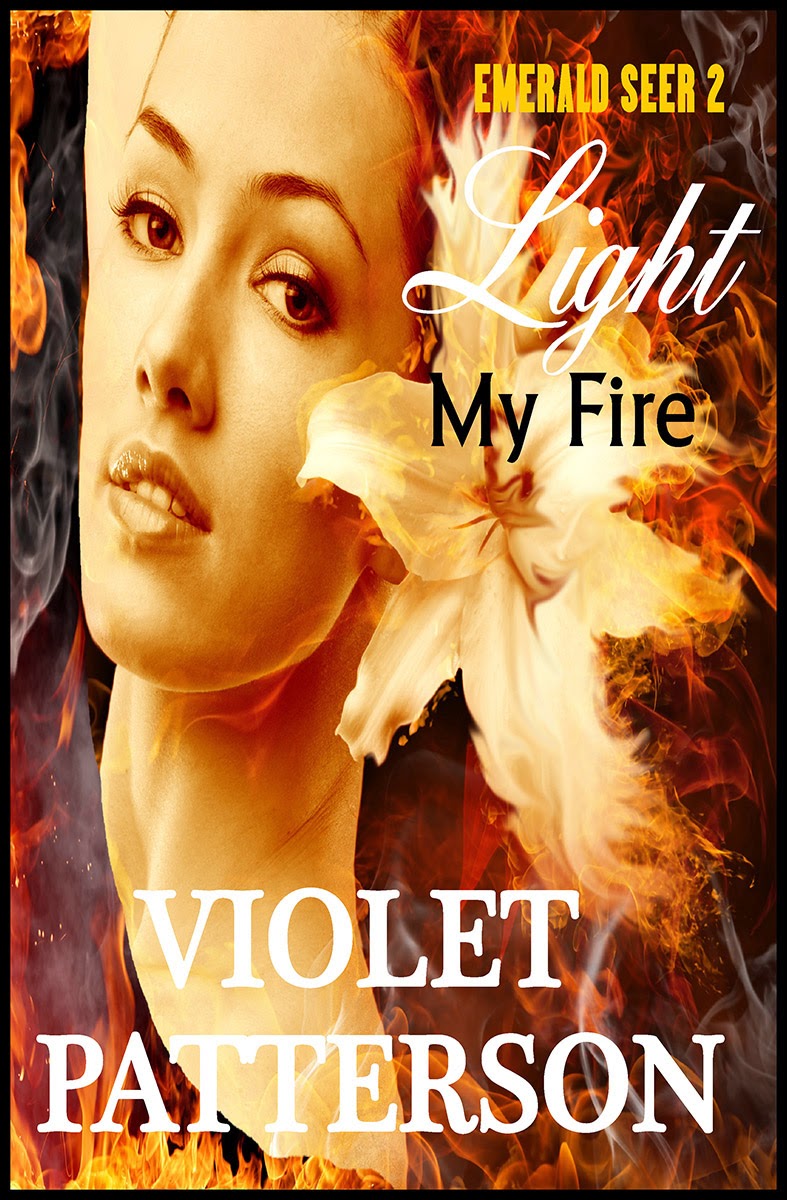 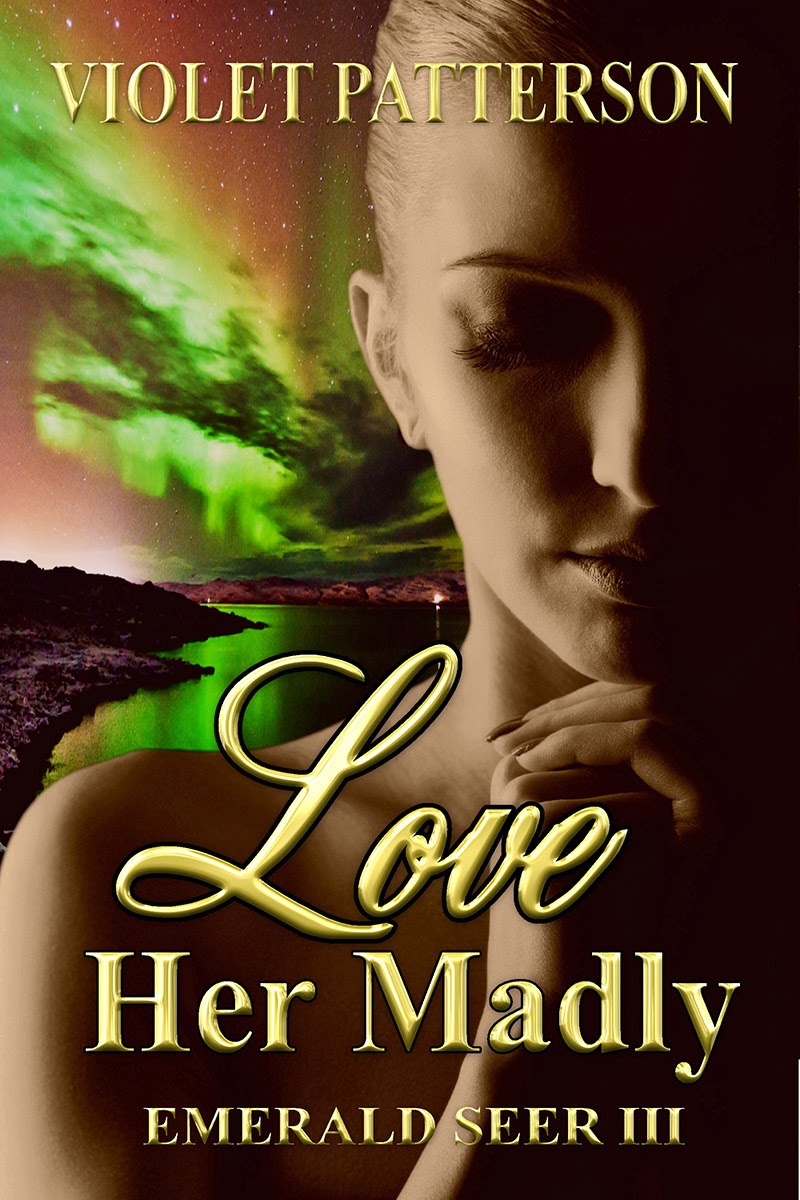 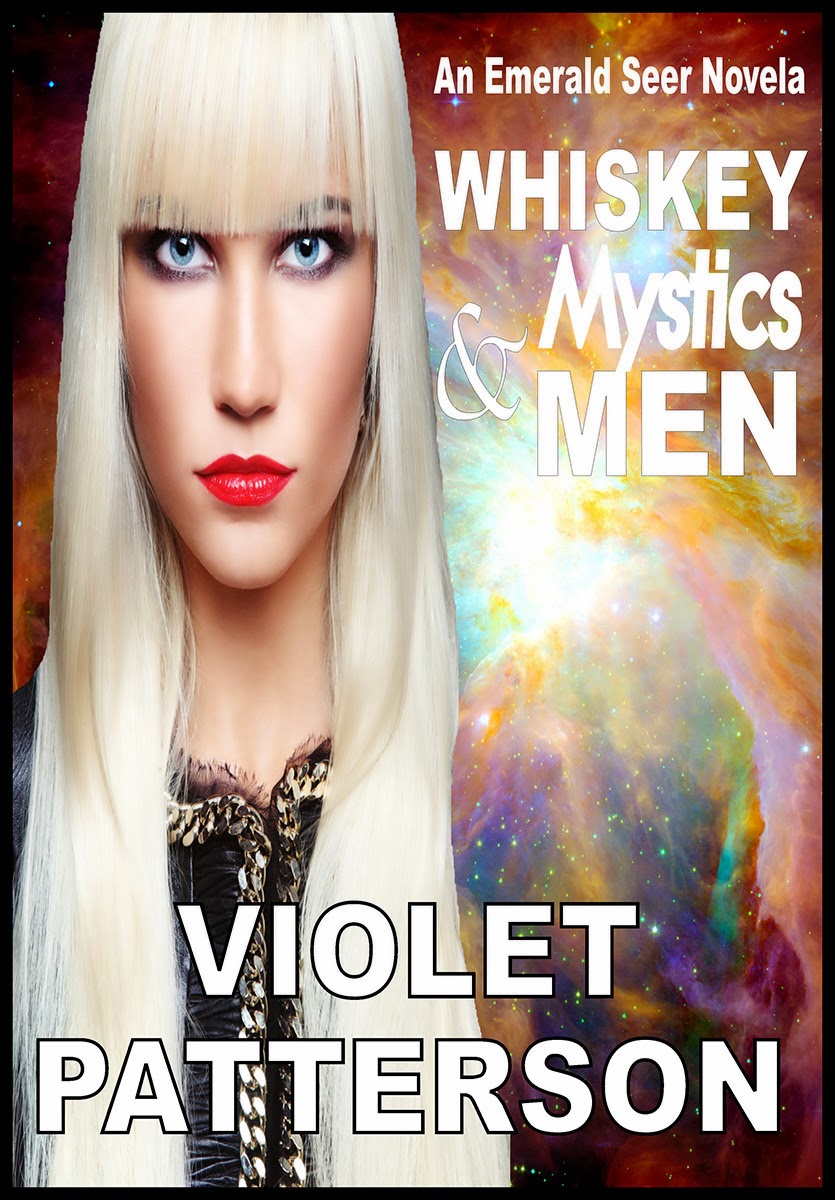 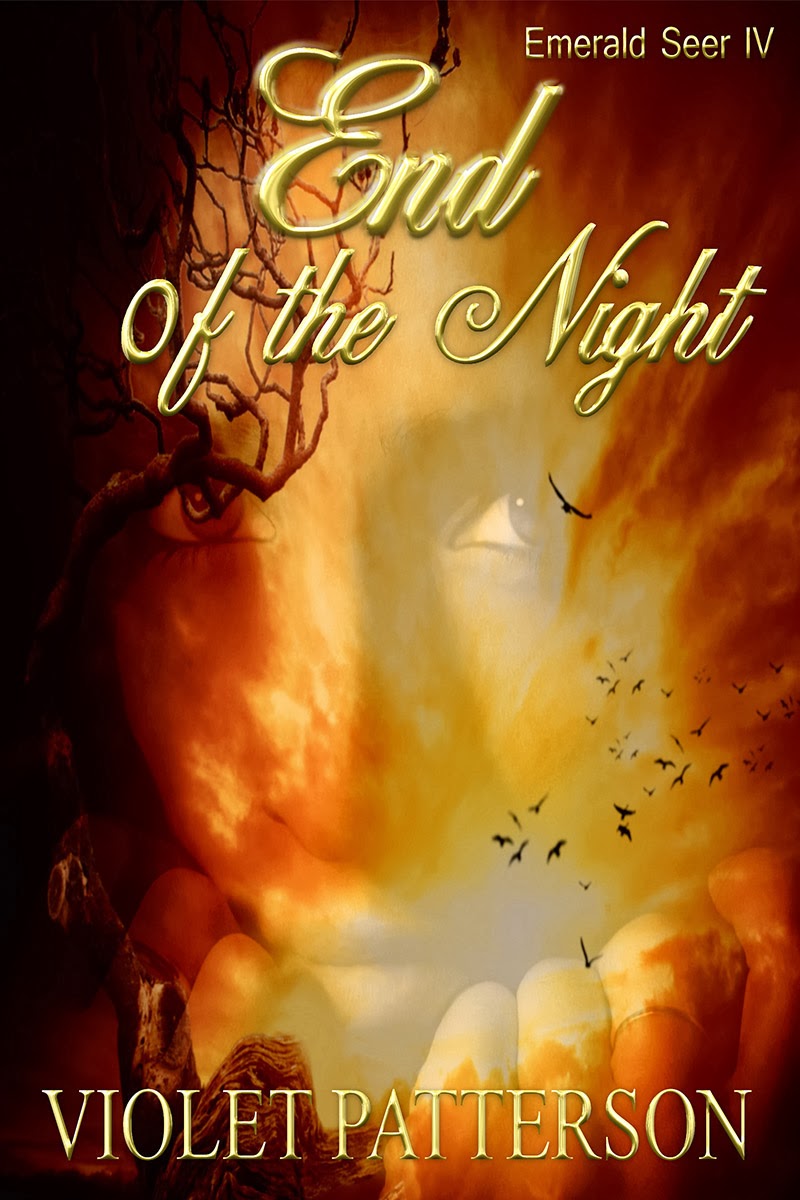 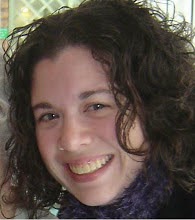 
Known in the convention circuit for her extravagant handmade top hats, Violet Patterson has also romanced her way into the hearts of Urban Fantasy readers with the Emerald Seer Series. With a cast of Seers, Seraphs, Immortals and more, Violet strives to leave her Midwestern roots behind as she soars to the far reaches of her imagination to compose vibrant stories of action and intrigue, magic and fantasy. Her current project promises to imbue part of the Emerald’s world with a healthy dose of Steampunk – stay tuned for Immortal Machinations. 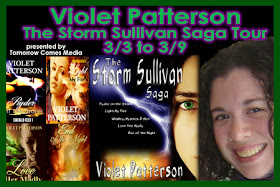