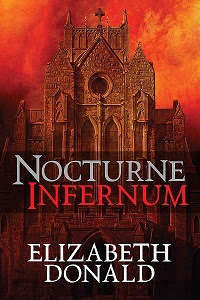 Genre: Urban Fantasy/Paranormal Romance
Seventh Star Press
Nocturne Infernum includes the original three chapters in the Nocturnal Urges series, an alternate version of present-day Memphis in which vampires walk among us, but are not treated as our equals. They work the night shift, the jobs no one else wants, and they’re not too happy about it. Meanwhile, humans take advantage of the pleasures vampires can provide, but call them friends? Lovers? The gap between human and vampire stretches wide as death rises in the streets of Memphis.

Nocturnal Urges. It’s the most popular club in the Memphis nightlife. Part legal bordello, part feeding ground for the city’s vampires, Nocturnal Urges offers pleasure and pain in one sweet kiss. It’s the ultimate addiction: both drug and sex at once. For the vampires, it’s the only way to survive in a world where the creatures of the night are a dark underclass, ignored until the humans need another fix.

Into this world comes Isabel Nelson, a young woman seeking only a night’s pleasure. But after Isabel’s lover takes her to try the bite, she cannot stop thinking about Ryan, the dark vampire with whom she shared her lifeblood – and who is now suspected of murder. Isabel falls into a world where passion and love are miles apart, where life and unlike have little meaning… and someone is hunting in the shadows.

A More Perfect Union. Samantha Crews has lived a long time in the shadows of Memphis, working at Nocturnal Urges and hiding from the vampires that darken her past.

Det. Anne Freitas is stuck with a new partner, a young woman with a chip on her shoulder. Now they’re assigned to investigate a series of threats against congressional candidate Robert Carton, for whom Samantha volunteers.

But Samantha is falling for Danny Carton, the candidate’s son – an idealist who wants to make life better for humans and vampires alike. But there’s a lot Danny doesn’t know about Samantha.

He doesn’t know she’s a vampire.

He doesn’t know she works at Nocturnal Urges.

He doesn’t know his own father is one of her clients.

And he doesn’t know what’s stalking her…

Abaddon. The Lady Zorathenne requests the honor of your presence at a celebration. A toast, if you will. Followed by a feast.

Beneath the dark Memphis streets, something is stirring. Filled with ancient fury. Seeking revenge on the ones who live above. A revenge born in fire.

The fires are ranging in Memphis and no one is safe. Ryan and Samantha must descend into darkness beyond their imagining to find answers to the mysteries of the past, as Detectives Freitas and Parker seek the truth about the present.

And the return of an old foe could make the future a dark place indeed… save for the flames of Abaddon.

Excerpt
Sanford nodded and turned to leave, putting on an overcoat.
Parker called after him, "Where can we find you?"
Sanford turned back to her, his eyes hollow and blank in that unfathomable mask. "Why would you need to find me?"
Parker blinked. "If we find the guy. When we find the guy. To let you know."
Sanford seemed frozen, as if it hadn't even occurred to him. "Call my office," he said, and turned back to leave, settling an old-fashioned fedora — incongruous with his T-shirt and windbreaker — on his head before stepping out into the fading sunlight.
Parker frowned. "Doesn't think we'll catch the guy. Doesn't even consider it a possibility. That's odd."
"Odd my ass," Flanigan said. "I'm no cop, but I can tell when someone's hiding something."
Parker grinned. "You talk like a cop."
Flanigan shook his head. "Firefighter, switched to arson investigation six years ago," he said. "I've seen plenty of firebugs, torching for fun and profit. Sanford there, he's no bug, but he knows who did it."
"Well, he knows something," Parker said, following Flanigan out into the parking lot. The sun was setting, coloring the sky a pale orange, quickly moving toward darkness. Flanigan's car was parked not far from hers, the only two with a detachable emergency bubble on the top.
"I bet he didn't give it to Cox," Flanigan mused.
Parker gritted her teeth. "That son of a bitch hates vamps, hates anyone who associates with vamps and is about as pleasant as a cockroach with a hangover," she said.

"Whatever Sanford had, he didn't spill it to Cox."
"I kind of got the feeling Cox wasn't giving this case his full attention," Flanigan said ruefully. He opened his car door.

"You'll let me know if something comes to mind, right?"
"First call. Well, second, after my partner," Parker amended. "No offense."
"Of course," Flanigan said, and waved farewell before getting into his car. Parker watched him drive off, then went around to her own car. Lost in thought, she got in, waving the air a little at the faint smell of Freitas' cigarette smoke.
"Detective," whispered a voice from the backseat.
"Shit!" Parker shouted, her hand instantly dropping down to her service pistol. A steel grip grasped her around the neck and pulled her back against the seat.
"Drop the gun, my dear, or you'll never eat solid food again," the voice whispered, pressing a thumb against the hard bones in the back of her neck. It was a smooth, male voice, promising sickly sweet treats and decadence in its sultry hiss.
Parker let her hand fall away from the gun and raised her hands to the wheel, her heart pounding in fear. Diego, motherfuck it's Diego, he's back and Samantha didn't sense it, fuck I'm fucked it's fucking DIEGO...
"Relax, my dear, I wish you no harm," the voice whispered, a sibilant hiss in her ear. "Your delightful Lieutenant Cox and the bumbling fireboy are of no concern. You, however, are beginning to vex me. Wherever I go, there you are. You and your lovely partner."
Language is too formal for Diego, even with pretensions, thought the part of Parker that remembered she was a cop. She tried to calm down, think it through. No one was visible in the cold grey twilight of the hospital parking lot.
"What do you want?" Parker asked.
"Shhh," the voice whispered. "Meddle not in the affairs of vampires, for we shall inherit the earth. What shall become of our food when we walk our streets again?"
Not Diego but just as fuckin' crazy. Parker tried to figure how she could break the grip before the nutbar in the back managed to break her neck. She glanced up at the rearview mirror, but it showed nothing. He was definitely a vampire.
In the darkening light, Parker saw Flanigan's car circling back into the parking lot. Her sudden flash of relief was immediately extinguished by added pressure on her neck. Her hand slid slowly down the side of the steering wheel.
"If you touch the horn, your friend will die as well and I will finish your lovely partner at my leisure," the voice hissed.
Frustration and anger welled up inside Parker. She wanted to turn, to strike at him, to fight him, as she knew she could. She was no vampire, but she could give him a memorable fight at least. But the image of being trapped in a hospital bed, unable to move, unable to breathe or eat on her own, a living death trapped inside her wasting body... He picked the right threat. Smart fucker.
"How do I know it's really you who did it?" Parker asked.
"I have the lovely girl's ring," the voice whispered. "I do not need this." A perfectly smooth, marble-white hand—definitely a man's hand, by the bone structure—reached over Parker's left shoulder and dropped something in her lap—a small book, bound in brown leather with gold-leaf edges. A diary.
Then the hand slid against her cheek, cool to the touch with long, talon-like fingernails that scratched lightly along her jaw before tracing the bite scar on the side of her neck. Parker shuddered, unable to move, hating herself for being afraid. A tiny tear escaped the corner of her eye, and she hated it as well.
"Do not move," he said. The door opened and suddenly the hands were gone from her neck.
Instantly Parker had her gun out and leaped from the car. She leveled the gun in all directions, bracing herself against the side of the car, her heart pounding even harder.
Flanigan pulled up beside her and jumped out of his car, engine still running. "Parker! What is it?"
"Shut up!" Parker shouted, scanning the lot. She moved between the cars, her heart pounding, the gun pointed every way she could see. No one was there.
"Goddammit!" she shouted, moving back toward her car. "Goddamn motherfucker, goddammit!"
Parker holstered the gun, leaning against her car next to the still-open door. "Fuck," she whispered, and another tear escaped.
"Hey," Flanigan said. "What the hell is—"
"He was here," Parker said. "He was fucking here and I—"
She shuddered, fighting it. She struck the side of her car with a balled-up fist and succeeded only in slightly denting the metal.
"Hey," Flanigan said, and laid a clumsy hand on her shoulder. She looked up at him for a moment and almost thought she could literally cry on his shoulder. There was concern in his face, kind and worried.
Then Parker got hold of herself. She looked into the car and there on the floor of the driver's seat was the diary.
"We have a clue," she said.

About the Author:
website-FB-twitter
About Elizabeth Donald: Elizabeth Donald is a writer fond of things that go chomp in the night. She is a three-time winner of the Darrell Award for speculative fiction and author of the Nocturnal Urges vampire mystery series and Blackfire zombie series, as well as other novels and short stories in the horror, science fiction and fantasy genres. She is the founder of the Literary Underworld author cooperative; an award-winning newspaper reporter and lecturer on journalism ethics; a nature and art photographer; freelance editor and writing coach. In her spare time, she… has no spare time. 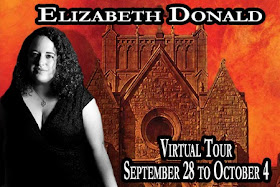