From New York Times and USA Today bestselling author Larissa Ione, comes RAZR, a passionate and spellbinding novella from the Demonica Underworld Series, brought to you by 1,001 Dark Nights! Be sure you grab your copy today! 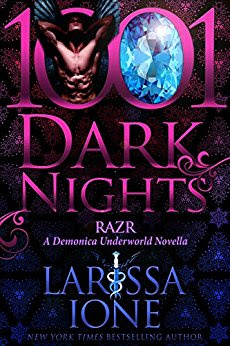 152 typed pages of pure magic. That's the best way to sun this one up. Oh and.....Larissa is back!!!! Every moment over the past few weeks I have waited for this one to come out, and it did not disappoint! Some authors are just unfairly gifted with the ability to write a dope as hell series, this author is in that top shelf caliber. If you can be the best. Then BE the best.

If you don't know the Demonica series, now's your chance to get a hot little taste. This one has bite. But my undead gods does the bite feel so good! We follow our leads on the trail of a diamond, I mean it is a girl's best friend and all. Passion and adventure ensue, the ride is fast but worth every moment. Forgive me, but I just can't spoil this one with too many details.

If you love a well written, expertly executed PNR with darkness and fire then you, my good reader, have found your home.


Excerpt:
Shivering, she went back inside and fetched the med kit from the bathroom. Razr was still passed out cold, so gently and carefully she stripped off his slacks.

He didn’t wear underwear. Oh, my.

Her mouth went as dry as the sand forest in her elven homeland as she took in his magnificent body. Everything began to burn, parts of her she’d all but forgotten she had in the five years since she’d last been with a man. The fallen angel was about as perfect as anything she’d ever seen. Made sense, she supposed—she’d never thought angels would be anything less than perfection. But seeing one naked and up close? No one could blame her for wanting to take pictures and post to all her friends on Instagram, right?

Cursing her ethics, she arranged him on his belly to allow access to his shredded back. Shame at the fact that she’d just ogled him shrank her skin. Gods, he must have been in so much pain. She’d nearly passed out herself during the beating, unable to stomach the sight of muscle and bone exposed by the deep lacerations.

Making matters worse, Shrike had reveled in the gore, growing angrier with each strike, as if he’d been taking some deep inner pain out on Razr. When it was over, he’d thrown down the cat and fled the office without a word, leaving her to gather Razr’s unconscious body and find her way out of the castle.

At least the wounds had stopped bleeding and were already starting to heal. Still, this was one of the times she wished she’d chosen the garnet Gem of Enoch instead of the diamond. Jedda and her sisters hadn’t known what power each of the gems had possessed at the time they’d chosen and assimilated them, but neither Jedda nor Reina had been completely happy with the outcomes. Manda had embraced the killing power of her stone, but Reina had no desire to heal and had been furious. And while Jedda’s gem had given her an ability to violently repel demons that she actually used sometimes, being able to help now and then would have been cool too.

Very carefully, she cleaned Razr’s wounds and applied bandages, each one drawing an elven curse from her. Such a perfect body, torn to shreds on a regular basis. He had no scars—at least, none that were visible. She’d heard there were species of demons that could see scars no one else could, and she wondered what one of those demons would see if they looked at Razr.

About the Author:
Website-FB-Twitter
1001 Dark Nights
Larissa Ione is a New York Times and USA Today betselling author. An Air Force veteran, she traded in a career as a meteorologist to pursue her passion of writing. She now spends her days in pajamas with her computer, strong coffee, and supernatural worlds. She believes in celebrating everything, and would never be caught without a bottle of Champagne chilling in the fridge…just in case. She currently lives in Wisconsin with her U.S. Coast Guard husband, her teenage son, a rescue cat named Vegas, and her very own hellhound, a King Shepherd named Hexe.