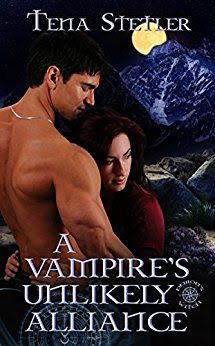 Stefan is a Native American vampire, former assassin for the Vampire Council. In a twist of fate, he now DJ’s the midnight shift for a small radio station in Whitefish, Montana, on the edge of Glacier National Park where his secret is safe until...

Born in Ireland, Brandy now works as a park ranger and trail guide in the park. During a full moon, Stefan and Brandy’s paths cross in a near physical collision on a trail. Their attraction is immediate and undeniable, almost as if fate demanded it.

Their union was foretold long ago in Irish folk tales where vampires and gryphons, warlocks and demons, witches and faeries must work together for the good of man and magic kind. Is a trip to Ireland the key to unraveling secrets and returning the magic? And even more importantly, will their love survive the trip?
Amazon AmazonUK Amazon AU
BN iTunes The Wild Rose Press

Sexy Native American vampires AND Irish folklore? Yes, yes, yes count me in baby! The plot description alone had me chomping down some lucky charms in a wee hurry. I wanted to really love-love this PNR, however, I was a tad disappointed when the story itself felt predictable and in parts a bit overcooked.

Now, that's not to say that there wasn't a lot to like. You have some really hot and steamy sections that added to my overall investment in these two characters. Their interactions were for the most part pretty good, the areas that lacked for me were in the setting descriptions and smooth transitions from scene to scene. If this was a movie, it would be chopping in the editing parts and jump right into the next moment.

I did enjoy the action and adventure aspects for sure. Going back to Ireland had me looking up plane tickets and wishing to see it all again. Everyone should take a trip to Ireland and I hope this book really gets people over there!

Overall, the story was okay. I would have liked more splashes of color and vibrant dialog but as a PNR goes this was a very decent read.

Excerpt:
The sun slid behind the mountains, setting the azure sky ablaze in hues of red, orange, yellow, and pink. Then red shifted to purple and dusk faded to darkness as he jogged toward the trails. She stood leaning against the rock where he had started his run last night. He’d tried to convince himself to stay away, but in the end, the urge was too strong.

In a whisper of movement, he was at her side with his hand on the rock just above her shoulder. “Waiting for someone? Brandy, is it?” The scent of warm, perfumed female skin wafted over him as he leaned into her.

“It took you long enough, Mr. Talltree.” Her full lips formed a slight pout as she lifted her chin and tilted her face up to meet his. “Nice to see you again.”

There was no hesitation or apprehension in her lovely features as he moved closer, placing his other hand next to her left shoulder, effectively pinning her against the rock. He wanted to wrap his arms around her lithe, warm body and brush his lips over her sexy pout. But he thought better of it, not wanting to scare her off…not yet.

“Yes, it is.” He let his gaze wander leisurely up and down her luscious body. “Didn’t your mother warn you about the dangers of stalking a stranger at night in the park alone?” 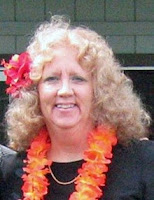 About the Author:
Website-FB-Twitter
Authors’ Secret’s Blog
My Say What Blog
Pinterest-Tribber
Goodreads-Amazon
The Wild Rose Press
Newsletter
Tena Stetler is a paranormal romance and cozy mystery author with an over-active imagination. She wrote her first vampire romance as a tween, to the chagrin of her mother and the delight of her friends.

With the Rocky Mountains outside her window, Tena sits at her computer surrounded by a wide array of paranormal creatures telling her their tales. Colorado is her home; shared with her husband of many moons, a brilliant Chow Chow, a spoiled parrot and a forty-year-old box turtle.

Any evening, you can find her curled up in front of a crackling fire with a good book, a mug of hot chocolate and a big bowl of popcorn. Her books tell tales of magical kick-ass women and mystical alpha males that dare to love them.