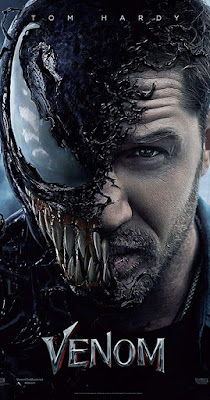 
Rating: PG-13 (for intense sequences of sci-fi violence and action, and for language)
Genre: Action & Adventure, Drama, Science Fiction & Fantasy
Runtime: 112 minutes
Studio: Columbia Pictures
Journalist Eddie Brock is trying to take down Carlton Drake, the notorious and brilliant founder of the Life Foundation. While investigating one of Drake's experiments, Eddie's body merges with the alien Venom -- leaving him with superhuman strength and power. Twisted, dark and fueled by rage, Venom tries to control the new and dangerous abilities that Eddie finds so intoxicating.

I don't understand all the hate for Venom. My 17-year-old daughter and I went to see it. We both found it entertaining. Stop comparing it to other Marvel films and enjoy it for what it—fun!

The critics are right about the first part of the movie. It moves slowly compared to the second half. But that doesn't mean the first part is bad. And Holly and I agree that the action-packed half makes up for it.

I didn't know much about Venom before seeing the movie so I'm not comparing it to the comics. I loved Venom. He is a snarky alien who got put in a snarky guy. With the PG-13 rating, there is no blood even though Venom eats a head or two...but they totally deserved it!

This movie isn't a masterpiece, but we laughed and cheered. There are a lot of big action scenes that look great on the big screen. If you see it be sure to stick around for the two after credits scenes!

Holly and I give it 4 "Apologizing" Sheep